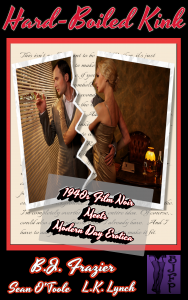 “Hard-Boiled Kink” is a collection of three short stories from B.J. Frazier, Sean O’Toole and L.K. Lynch.  Each story applies the 1940s Film Noir trope and language to contemporary kink.  The spoof packs the heat!

Noir Guy is the 1940s detective story which doesn’t fade to black on his sex life.

Each story contains a plot, well-developed characters and sizzling sex that would’ve caused the 1940s black-and-white movies to blush!

One Night in Atlantic City ~ by L.K. Lynch

Like much of what I write, AC has elements of past events woven through the story arc – in this particular case, more elements than I’d care to acknowledge.  In fact, should some of the “dogs” actually get their hands on this tale, they would recognize it in short order.

The style of the story has a ‘40s detective movie narration to it.  Although the story’s setting is most certainly not of the ‘40s, to me, it definitely had that feel.  The events that inspired the piece occurred at a point in my life where I quite easily would have been that hard-drinking, chain-smoking private dick, with a personal life in shambles, carving out a living in the seedy side of town.

Why did I write it?  I suppose because it was a story that needed to be told.  If you’re Catholic – or were – you know what confession is.  In a perfect world, they would tell you that the secrecy of the sacrament and the darkness of the confessional ensures that no one but you and G-d – channeled through Father So-and-So – will know of your transgressions.  But this is not the kind of story that gets told in the confessional, and, dear reader, I trust that you are not my priest!

That said, the story is my testimony, and I humbly ask that you forgive me my trespasses; for my penance, I will continue to spill my wretched soul for your reading pleasure!

I’ve long been a fan of hard-boiled detective fiction.  One of my favorite television programs (back when I was a young lad) was Peter Gunn.  I didn’t understand some of the adult references back then but I liked the look and feel of the show.  Later on, I discovered some of the great Film Noir movies like The Maltese Falcon, The Big Sleep, The Thin Man, and many others.  That led to collecting the written work of authors like Dashiell Hammett, Raymond Chandler, Ross MacDonald, Sara Paretsky, Robert B. Parker, John D. MacDonald, et al.

But I also liked movies that parodied the hard-boiled crime fiction genre like The Cheap Detective, and Who Framed Roger Rabbit.  And, like many others, I looked forward to the next installment of Guy Noir on Prairie Home Companion.

Which is why I decided to write my own parody/homage to tough P.I.s and crime fiction.  It started out as a comedy bit based on a joke I heard back in grade school.  But the characters were insulted that I didn’t tell their full story.  They put a gun to my head, and forced me to write this.

This is actually the first chapter of a murder mystery.  You won’t find out “whodunit” in this first bit but there’s more to come.  Consider it an appetizer.

Thanks for reading.
-Sean O’Toole

Rebuilding a Ford ~ by B.J. Frazier

The idea behind the entire book grew out of a discussion I had with L.K.  He casually mentioned a wild night in Atlantic City, but I wanted more details.  He said he’d already told me about it, but I pressed.

In a sarcastic (and probably late-night) response, it read like a 1940s film noir narrator.  And, while I hate to admit I’m wrong, he was absolutely right:  He had told me the story before!  However, were it not for my lapse of memory, “Hard-Boiled” would never have been born.

I loved the style so much, I told him to turn it into a story.  Then I told Sean about it, and he wanted in.

They both thought it was going to be another threeway, but I didn’t want any part of it.  I had already begun to write my revenge novel and was itching to continue.  Besides, what was I going to write about the 1940s?  No thanks.

But as I read their drafts, I got inspired.  They captured the essence of the genre and brought it into present day!

Think it can’t be hot with specific verbiage?  Just wait ‘til you read it!

We had a blast writing this, and hope you, too, enjoy some humor with your heat.

P.S.  The revenge novel is back in progress!